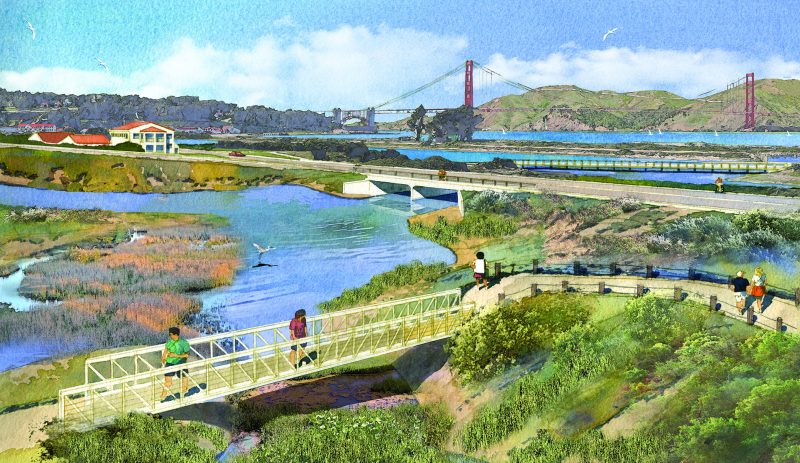 Following the recent reestablishment of seven acres of tidal marshland connected to San Francisco Bay, natural habitat is recreated, and native species — particularly oysters — are able to return to their homes.

The art and gallery will be visible from the street where anyone can view it, 24 hours a day, beginning Saturday, February 27th at Levy Art + Architecture 2401 Bryant St, San Francisco.

RSVP for the opening night outdoor reception on LinkedIn.

About the Quartermaster Reach Project

In December 2020, the Presidio Trust unveiled to visitors seven acres of re-established tidal marshland and a new pedestrian trail near San Francisco Bay.

The site is known as Quartermaster Reach, named for the U.S. Army’s Quartermaster Corps, which operated in the area when the Presidio was a military post. The project transforms a formerly paved construction site under the “Presidio Parkway” approach to the Golden Gate Bridge into a beautiful new wetland ecosystem. Creeks now flow above ground along the Presidio’s largest watershed known as Tennessee Hollow to San Francisco Bay through Crissy Marsh, improving the biodiversity of the Presidio. The shallow tidal estuary is the natural habitat for oysters that were once prolific in the San Francisco Bay.

Quartermaster Reach is a huge milestone in the 20-year effort of the Presidio Trust, the Golden Gate National Parks Conservancy, and the National Park Service to restore the park’s largest watershed. The site will allow visitors to enjoy an intimate experience of nature just minutes from downtown.

Another area where art + architecture meet with environmentalism are the parametric 3-dimensional oyster substrates designed and fabricated in the Architectural Ecologies Lab at CCA. These are designed to provide a habitat for oyster growth at the newly-opened Quartermaster Reach.

David’s pinhole cameras are constructed from nature, in order to photograph nature. He turned Pacific Oyster shells into pinhole cameras that captured images of their forest surroundings. Read more about the project as featured on Smithsonian Magazine. See more photos of these incredible oysters-turned-photograph on David’s website.

A two-channel video documenting place, culture, and a window into oyster farming in West Marin. It is based off of three basic facts:

About the Partnership for the Presidio

The Partnership for the Presidio works to sustain the Presidio’s natural beauty, preserve its history, maintain its funding, and create inspiring national park experiences for visitors. Two federal agencies manage the Presidio jointly: the Presidio Trust and the National Park Service, with support from their non-profit partner, the Golden Gate National Parks Conservancy. Together, the partnership has transformed one of America’s most storied military posts into the centerpiece of one of the most visited places in the national park system.

We have a long and extremely productive working relationship with Natural Discourse, teaming up to work on a series of environmentally-focused art productions in our galleries and around California.

Natural Discourse is an ongoing series of symposia, publications and site-specific art installations that explore the connections between art, culture, science and site. It is curated by Shirley Alexandra Watts.

Levy Art + Architecture is an interdisciplinary studio that functions at the intersection of architecture, environmentalism and art. A full-service design firm, with specialties in sustainability and construction, it is also an experimental art space. Exhibits typically concern larger social and environmental issues. The architecture and art mutually inform one another.