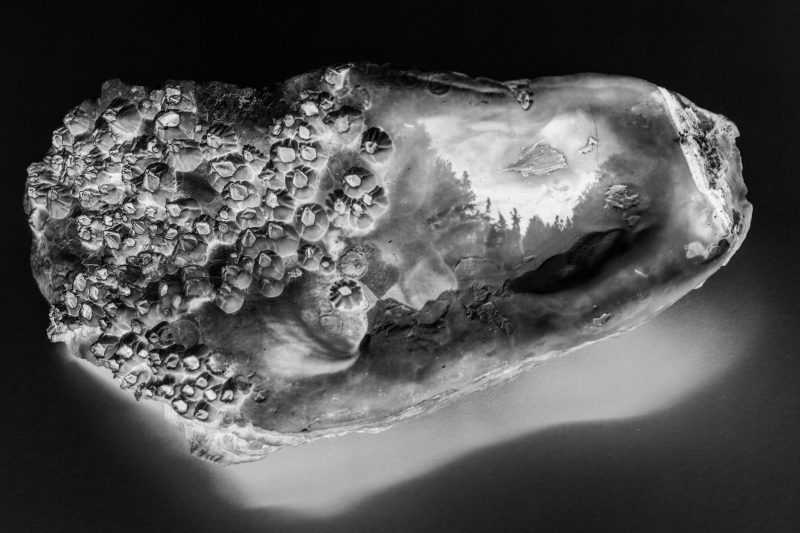 David Janesko’s poetic series Forest/Oyster was the initial inspiration for the exhibit. Delicate images of the forest surrounding the Willapa Bay in Oregon are imprinted on the inside of the shells. Jonathon Young, wildlife ecologist at the Presidio, provided us with concrete oyster reef balls and computer-designed oyster panels by architecture faculty Margaret Ikeda and Evan Jones of Architectural Ecologies Lab. These objects are part of a native oyster restoration project at the new Quartermaster Reach tidal wetland at the Presidio. Taylor Griffith’s Heard Above, a 19 minute video was filmed at Quartermaster Reach and will be projected every weekend from dusk to 9 pm. From ecology to oyster farming and culinary delights, Chris Kallmyer will be showing Consider the Oyster a 2 channel video about the last year of the Drake’s Bay Oyster company and a series of Gwendolyn Meyer’s photos from her beautiful book Oyster Culture.

Healthy oyster reefs are a proven way to effectively reduce water pollution and improve the marine environment. While other bivalves also possess the ingenious ability to clean water while flushing out pollutants as they feed, none are simultaneous symbols of feasting, as is the oyster.

Natural Discourse is collaborating with Levy Art + Architecture to consider this wondrous bi-valve.

Natural Discourse is an ongoing series of symposia, publications and site-specific art installations that explores the connections between art, culture, science and site. Founded in 2012 by Shirley Alexandra Watts, a landscape artist, architect and contractor with extensive experience curating, managing and installing public art exhibitions. Projects include the University of California Botanical Garden at Berkeley, Los Angeles County Arboretum and Botanic Garden, and Sagehen Creek Field Station. Natural Discourse has been awarded grants from Los Angeles County Arts Commission, the Pasadena Art Alliance and the National Endowment for the Arts. naturaldiscourse.org

Levy Art & Architecture is an interdisciplinary studio that functions at the intersection of architecture, environmentalism and art. A full-service design firm founded by Ross Levy with specialties in sustainability and construction, it is also an experimental art space. Exhibits typically concern larger issues from social to environmental. The architecture and art mutually inform one another.

Together, these two teams have been working on a series of environmentally-focused art productions in galleries in and around California.

Live oysters will be served! Social distance and safety protocols will be enforced.