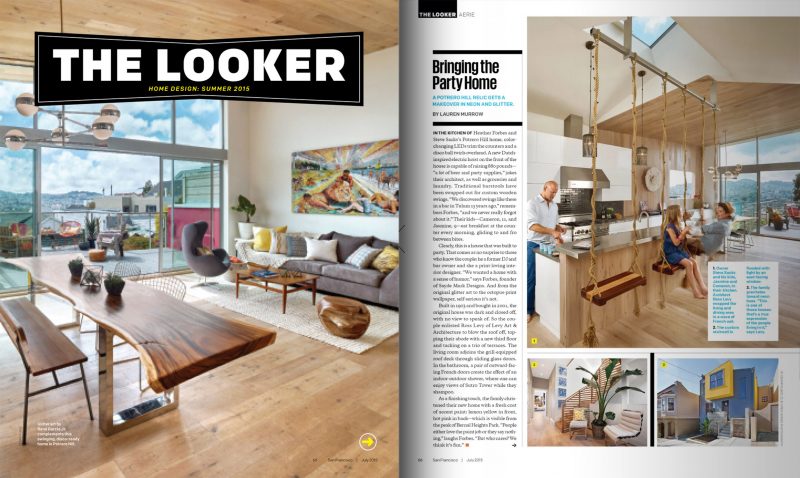 A POTRERO HILL RELIC GETS A MAKEOVER IN NEON AND GLITTER.

IN THE KITCHEN OF Heather Forbes and Steve Sacks’s Potrero Hill home, color-changing LEDs trim the counters and a disco ball twirls overhead. A new Dutch-inspired electric hoist on the front of the house is capable of raising 880 pounds— “a lot of beer and party supplies,” jokes their architect, as well as groceries and laundry. Traditional barstools have been swapped out for custom wooden swings. “We discovered swings like these in a bar in Tulum 15 years ago,” remembers Forbes, “and we never really forgot about it.” Their kids—Cameron, 11, and Jasmine, 9—eat breakfast at the counter every morning, gliding to and fro between bites.

Clearly, this is a house that was built to party. That comes as no surprise to those who know the couple: he a former DJ and bar owner and she a print-loving interior designer. “We wanted a home with a sense of humor,” says Forbes, founder of Sayde Mark Designs. And from the original glitter art to the octopus-print wallpaper, self-serious it’s not.

Built in 1903 and bought in 2001, the original house was dark and closed off, with no view to speak of. So the couple enlisted Ross Levy of Levy Art & Architecture to blow the roof off, topping their abode with a new third floor and tacking on a trio of terraces. The living room adjoins the grill-equipped roof deck through sliding glass doors. In the bathroom, a pair of outward-facing French doors create the effect of an indoor-outdoor shower, where one can enjoy views of Sutro Tower while they shampoo.

As a finishing touch, the family christened their new home with a fresh coat of accent paint: lemon yellow in front, hot pink in back—which is visible from the peak of Bernal Heights Park. “People either love the paint job or they say nothing,” laughs Forbes. “But who cares? We think it’s fun.”