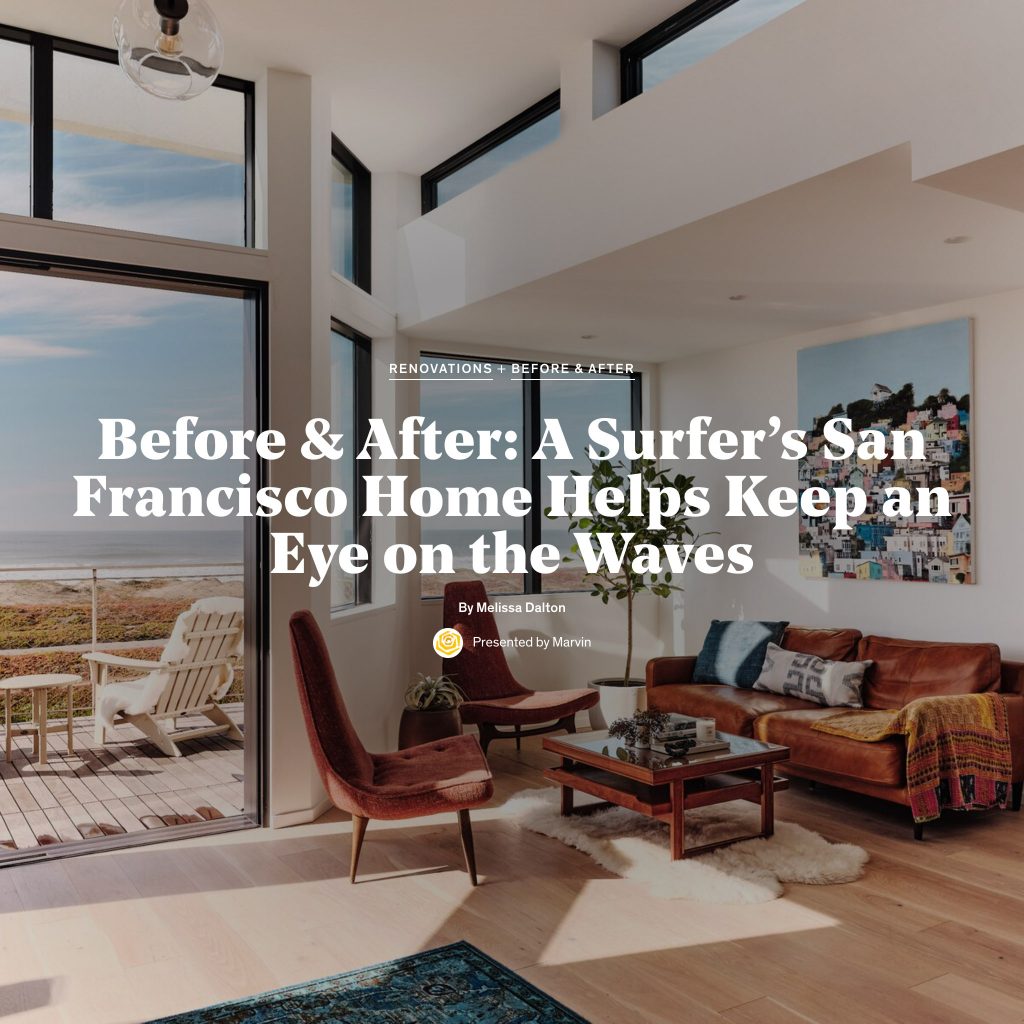 If you’ve walked around San Francisco, chances are you’ve passed a Marina-style house. After all, the style originated in the city’s Marina District. “They were simple houses: one story over a garage,” says architect Ross Levy, who overhauled a specimen on Ocean Beach last year.

Although the house faces the Pacific Ocean, much of its outlook was compromised by poor window placement and an ad-hoc addition. “Sometime in the ’60s, someone plunked a third floor on top of the house, and they really did plunk it down,” says Levy. “It was like someone airlifted some plywood and nailed it together. And then you had a third floor.”

This meant that the resulting interior floor plan was “strangely arranged” and not conducive for the home’s most recent owner, a passionate surfer drawn to its proximity to the water. Levy sums up the client’s brief: “See the waves from wherever you are. That was the program.”

The home’s existing layout clustered the living spaces on the second floor— there, the front door opened into the living room, and the staircase was crammed into a narrow passage. The bedrooms were then spread between the two floors, and there was an ocean-facing deck at the third level, but the view on one side was blocked by the house.

For the remodel, the team flipped the floor plan, relocating the communal spaces to a gently expanded third floor. Dubbed the “lookout,” that level is now filled with natural light and has an enviable vantage point of the water. The designers reduced the number of bedrooms to three and grouped them all together on the second floor.

As the architects started cataloging the available space during the preliminary design phase, they made a happy discovery: “There was this cavity between the second and third floors in the building that we didn’t fully understand until we started measuring and tearing stuff apart,” says Levy. “That gave us all kinds of design opportunities that we hadn’t really counted on.”

The team anchored the new design with a bold, sculptural staircase treatment, wherein the open oak tread appears suspended on a screen of steel rods. The delicate treatment allows light to flow down from the top floor. “One of the perennial problems with the reverse floor plan remodel is, how do you get the people from the bottom to the top?” says Levy. “So, we made this floating, rod-suspended stair to be as light as air, and to really draw your eyes straight up.”

Now, the home is more in sync with its surroundings—and even better, the homeowner’s lifestyle. Although the family only moved 20 minutes away from their last home in Bernal Heights, being this much closer to the water makes all the difference when taking advantage of good conditions. “For surfers, they can look at the surf report and [check the] cameras online,” says Levy, “but there’s a lot to be said for being there.”