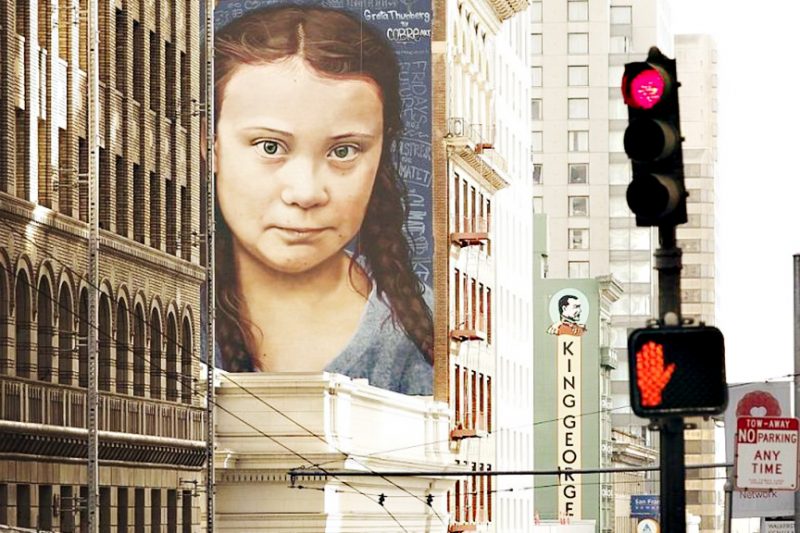 No one is too small to make a difference

Greta Thunberg’s compilation speaks of climate truth to power around the world. It records her comments on sixteen different occasions in one hundred earnest pages. Her consistent, persistent, dire, and urgent message: “We face a crisis. Where is the leadership? Where is the action? There are no grey areas when it comes to survival. Either we go on as a civilization, or we don’t. We have to change.”

The pandemic and the related fallout of our economic system have shown this truth to be self-evident. We face this public crisis together as cultures, civilizations, and as a species. We are changing. Every single person counts. Just like every single emission counts. Every single kilo. Everything counts. So Please, treat the climate crisis like the acute crisis it is and give us a future. The resistance to her message and to green transformation has always been, “It’s bad for business, the GDP can’t support it.” This “novel” pathogen is airborne, spreading globally, and wreaking widespread havoc on the whole set of human, economic and social systems. It kills. We are at the crossroad.

Whether you are infected or not, you’re impacted.

We are periodically reminded that the economy, the notions of surplus production, merchandise, capital, and trade are only buffers that stand between us, and the fluctuations of the natural world. Currency and economies are things that originated with sedentary agriculture: they exist by human consensus, not a natural fact. Their “essential” function is to regulate the production flow of goods and create a better standard of living between us and the natural world. In this case, the economy deflates in response to the novel pathogen like a national airbag, preventing large loss of life in a crash test. Mother Nature bats last, and she throws curveballs, C-19 being her current play. We know that more frequent and more radical weather fluctuations will create floods, fires, and droughts. These are accompanied by pest, pandemics, and extinctions. All of this is increasing over time. The old systems no longer make sense and the traditional responses won’t work. We have stopped everything. It’s a time of national and international reflection. It’s a time to re-order our priorities and re-imagine our relationship to the planet. It’s time for a new economic system.

We need to make an honest evaluation of what is “essential” and a move towards a resilient economy.

The virus is showing us precisely how this breaks down. The economy must first and foremost, be based on “essential” human activity with regenerative, rather than exploitive motivations. Different measures will be necessary to gauge its success: no longer profit, nor growth. Instead, bio-generation and social impact will be new benchmarks.

Again, the virus is the great teacher: it reduced 10 years of economic gain in a week, a cascading drop in demand, and devaluation on a global level.

We can create a new economic system that is based on actual value, health, and welfare. Not leveraged capital.

Buckminster Fuller, the architect, engineer, and futurist, understood that the only sustainable economy is socialized and global. Why? Because we all share this planet, the Spaceship Earth. We are all human, subject to the same exposures, no matter kind or creed. The human toll of unemployment, relocation, or upheaval is not to be underestimated. We need to come to terms with the fact that a lot of the work and activity that we are engaged in is far from “essential.” We need authentic leadership and real vision to navigate this pass. We need to be open to seeing the world as it is, not as we would like it to be. It is our job to take it in that direction. As he reminds us:

“We should do away with the absolutely specious notion that everybody has to earn a living. It is a fact today that one in ten thousand of us can make a technological breakthrough capable of supporting all the rest. The youth of today are absolutely right in recognizing this nonsense of earning a living. We keep inventing jobs because of this false idea that everybody has to be employed at some kind of drudgery because according to Malthusian Darwinian theory, they must justify their right to exist. So we have inspectors of inspectors and people making instruments for inspectors to inspect inspectors. The true business of people should go to go back to school and think about whatever it was they were thinking about before somebody came along and told them they had to earn a living.”

“You never change things by fighting the existing reality. To change something, build a new model that makes the existing model obsolete.” – Buckminster Fuller

Change is oftentimes difficult and abrupt. Just before the pandemic, I had a conversation with my son, a history major, about social and political change: the real change that was being presented by the progressive wing of the Democratic Party. I wondered if major change could happen slowly, deliberately, and democratically. He responded that, historically, change has been sudden, jarring, uncontrolled, and for many people, devastating. Covid-19 has done what Bernie Sanders alone could not accomplish, making clear in stark terms that the private health insurance model fails when we face a public health crisis. We’ve also seen how vulnerable our consumer economy is. How far we’ve strayed from “essential” and how quickly it all comes to a halt. As we contemplate a future, why would we recreate the same vulnerable systems that have just been so dramatically undone? It is time for change, and we’ve already begun.

It’s a strange kind of change that we are all experiencing, slow and rolling. In many ways more psychological than physical. Although thousands are ill, isolation and overexposure are real and physical phenomenons. It’s extremely hard to have a sense of what is happening on a larger scale, beyond the crisis of the moment: Today’s count. My experience is that I recognize the scope and scale of change more every day, through the permanence of the moment we are living through.

In terms of Civil Liberties and on an architectural level, our sense of space, freedom of movement, public and private is in flux. All assumptions on the table as we all reinterpret our personal decisions by public mandate. In the face of airborne pathogens communicating to humans so freely, “the only thing we have left is quarantine,” asserts critic Geoff Manaugh, who is writing a book on the topic.

“We have to return to this kind of medieval spatial response to disease control, which means that architecture and urban design suddenly become medical.” – Geoff Manaugh

The contemplation and creation of space: personal, social, near, distant, public, and private is the uniquely defining feature of the practice of architecture. We are moving into a new era of how we relate to dwellings and workplaces. As architects, we have a special responsibility to assemble the experience and data that come from the COVID-19 moment and use them to inform a new conception of living/working space, and ultimately form. Over the past decade, technology has “virtually” pushed retail into extinction, and “shelter in place” has now paved a future for the corporate office into our homes. Urban real estate is about to reinvent itself. Hopefully, we can embody Greta’s global concerns with Bucky’s vision. It’s not too late…

At Levy Art + Architecture, we are founded on the principle that architecture is the thoughtful synthesis of concepts, materials, and assembly. Ready to talk about your project? Get in touch with us, we are looking forward to working with you.